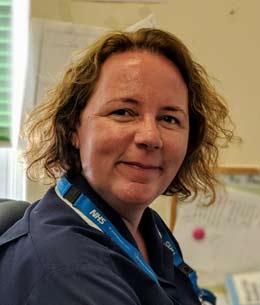 After qualifying Kim began her career on the Vascular Unit at Sheffield Teaching Hospitals. This gave her a good grounding in wound care and was the beginning of a passion for this area of nursing ever since.

Kim was instrumental in the development of a "lower leg project" in Sheffield. The project followed an audit of lower leg management, which highlighted lack of training amongst nurses in lower leg assessment and management. The project offered a novel approach to the problem by ensuring each district nursing team had two "lower leg Champions" and tackled the problem from two angles. Firstly, the champions were invited to work in the leg ulcer clinic for a month and at the same time a tissue viability nurse worked for a month in each district nursing team to identify the lower leg population in the caseload and improve standards within the whole team. The leg ulcer population of Sheffield is soon to be re-audited and the results are eagerly awaited.

Kim is also a guest lecturer at the University of Sheffield and teaches to pre and post graduate nursing students as well as practice nurses. Kim has presented at local and national conferences and also has a small number of publications.

Kim has undertaken research projects and also contributed to larger randomised trials. Research is an area she is hoping to develop over the next few years.

The Leg Ulcer Forum was established to promote improved outcomes for people suffering with leg ulcers and related conditions through evidence based practice and education.